Okay, a couple things:
1. I love to cook, and I like to think I'm rather good at it. Baking? Not so much. Cooking is like a game; toss in a little of this and a little of that, and it will turn out okay. Baking is like a science: if you deviate from a prescribed amount of the recipe's main characters, you will most likely totally flop. Rock-hard pizza dough, super-dense bread that's supposed to be light and airy... I could go on but it would be embarrassing. And, anytime yeast is involved the stakes get higher because of the large time investment.

2. I love to eat, and I like to think I'm rather good at it. While I would not say I am a huge fan of Swedish cuisine, the area that I have no complaints about is their pastry department. And, how awesome is this: many of their several holiday seasons (particularly Advent and Lent) have specific pastries to add to the celebration. AWESOME.

3. Over time, my husband has made me a big believer in the theory of, "Why pay someone to do something that I can do myself?" (There are limits to this, of course... like, I'm not quite ready to learn how to dry-clean my own clothes.) So, while I love to go to a cafe and enjoy my latte and delectable puff of flour/butter/sugar goodness, there is a certain Consumption Point at which it makes sense for me to cut out the middleman and start doing the baking myself.

The Semla is a most fabulous piece of heaven that haunts Sweden between Christmas and Easter, but remains quite elusive during the other nine or so months of the year. Traditionally it was eaten on Fat Tuesday, because it is so rich and decadent - it's prominent attribute is the almond paste center topped with whipped cream - that it was supposed to help fatten one up before the season of Lenten fasting. In modern times, Swedes eat them for three months and have foregone the fasting. Fair enough.

My Swedish friend Elin is a fabulous baker. She rolls out breads and cakes and scones like it's going out of style (although I assure you, it's not), and quite frankly, intimidates the yeast out of me! [lame attempt to make a baking joke]

And soooooooo, she did. 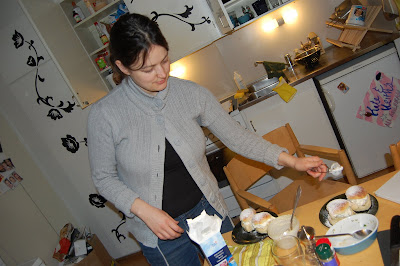 We used this recipe, which was great. If YOU use this recipe, it will require the use of both language and measurement translation, which Google can surely help with. Or, here's one I found in English, although it looks slightly more complex.

Here's the result, and they were absolutely as good as they looked. 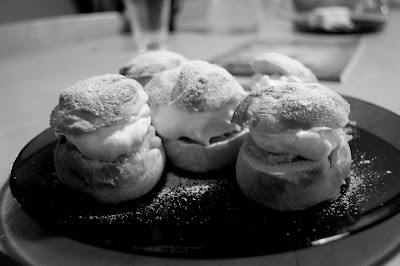 If you read the wiki article on semlor, than you know that the average Swede tends to eat about five semlor a year. I, on the other hand, ate four on Semlordagen last Tuesday, which, I suppose, makes me your average American.
Posted by kateisfun at 7:00 AM

oOo! I want one SOOO bad!