So, last time I told you all about my incredibly exciting trip to the Hobby Lobby, wherein I waded through the puzzling assortment of knitting books, yarns, and needles in an effort to begin a project and satisfy a creative urge. When I finally got my booty home I was impatient to begin the actual knitting, so I read through the instructions as quickly as possible. Casting on blah blah blah, garter stitch yadda yadda yadda, changing colors et cetera, et cetera, et cetera…ah, screw it, I’m ready to start. So, I cast on the prescribed 60 stitches. That part was not so bad. See, look: 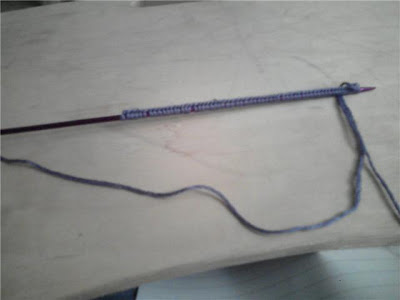 Good for me! Now, on to the knitting. Other than a little bit of trouble keeping the thread taut and the stitches moderately even, this part was not so bad, either. Yay! After a while I even started to get the hang of it and it became the rhythmical, undaunting task I had hoped it would be. I leaned back and proceeded to knit while enjoying Rick Steve’s Europe. However, I soon found that it was easy to lose track of how many rows I’d done, and when I tried to simply count them I became confused: does the row I cast on count? What’s this business about ridges? How are they different from rows? And then, most puzzling of all (and something that, despite a bit of lazy googling, I still have not found the solution to) why is the last stitch on each row so loose? When I take up the slack from it it’s almost like the last stitch of the previous row becomes the first stitch of the next row. Which is all well and good when I’ve only got one color, but when I switch between colors it looks like I have one stitch of yellow on my blue row, and vice versa. Any experienced knitters out there with the answer to this question are welcome to chime in.

Due to my confusion and misunderstanding of the meaning of ridges and rows, I switched colors too early and had to go back and undo a full row. Somehow I managed to do this without dropping a stitch, and all was well…until…you know, I blame Mario Batali and the infernally intriguing show “Spain…on the Road Again” because I was so distracted by tapas that I dropped a stitch. And the section of my book entitled “What to Do When You Drop a Stitch” instructed me to get out my crochet hook – a tool I had deemed unnecessary when shopping at the Hobby lobby, and thus did not now have in my arsenal. I did my darnedest to pick up that stitch with my needles, but ended up instead dropping another one. And then another. And another. And finally I just got so frustrated and furious that I pulled the whole mess off my needle. 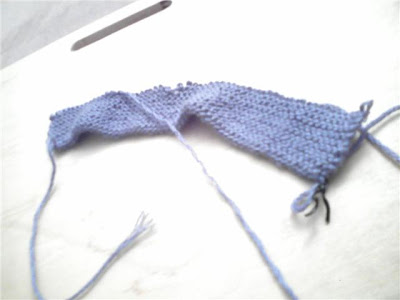 And then I started over. Admittedly, much of my initial zeal had then worn off, as the above pictured inch of knitting was two days’ worth of work, and I had come to the realization that, while soothing and enjoyable, knitting was not going to be nearly as productive as I’d hoped. At this rate I’d be lucky to churn out one placemat a year, and I could just forget entirely the idea of ever making a sweater. Nevertheless, I plodded on (this time with the yellow yarn, for a change of pace), the therapeutic benefits (which did seem to outweigh the frustration) being sufficient enough reason for me to persevere.

But, as I progressed on Attempt #2, I noticed something disturbing: according to my book, this placemat was supposed to measure 12” by 16”. I was a long way from determining what the final length would be, but it had by now become clear that my placemat was nowhere near 12 inches wide. In fact, to call it 8 inches would be rather generous. There was no way on earth a normal-sized dinner plate would ever rest on this mat. Well, see for yourself. Here’s a dinner plate: 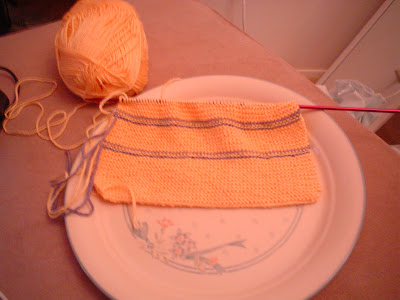 And now a salad plate: 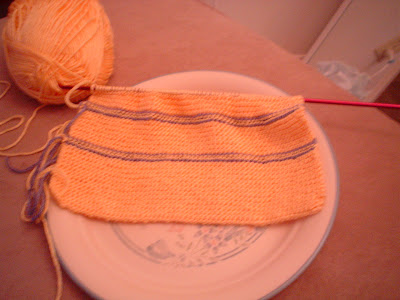 And now a tea cup saucer: 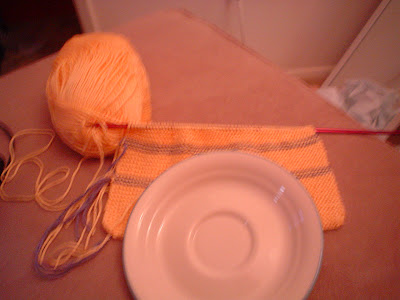 How on earth did it turn out so small?! I was following the directions to the letter! Except…uh oh…guess I should have held out for those size 8 needles after all. Shoot.

Well, I plan to finish my “placemat” someday. Just as soon as I think of a use for such a miniature piece of rectangular knitted fabric. I thought about making it a potholder, but it’s really not thick enough for that. Is there such a thing as a knitted handkerchief?
Posted by Annie Bierma at 7:00 AM

Moderately experienced knitter here! To tighten up the loose stitches on the edge: whenever you start a new row, knit that first loose stitch and then give a little tug on your working yarn and that will tighten it up. Give it a try and I think you'll see what I mean. I had the same problem and got this same advice when I first started. =)

And even if you have the "correct" size needles and the right weight of yarn that the pattern calls for, every knitter is different and you may have to make adjustments to get the right size. For the dropping stitches thing, go ahead and get a crochet hook, it'll be worth it. And you might want to try something with bigger needles and thicker yarn, easier to see what you're doing (and much easier when you're watching tv).

Lastly, welcome to the club!! Go knitting!! Best hobby ever!!!