A few weeks ago our little Toyota died...it's final death. Fortunately the hubs and I just took this as an opportunity to pull out the bicycles and use them as our main form of transportation. In addition to good exercise, riding my bike the 3 miles to work also saves the environment and mula.

Just in case you don't remember my bike, it's the green vintage Schwinn that I wrote about a couple of weeks ago. Our friend Norbs referred to it yesterday as "like the first bike ever made". I have to admit that the sentiment didn't bother me one bit. It was, after all, my grandma's bike. It has it's original pieces, including the light on the front and the chain guard to keep girls in the early 60's from getting their dresses and flair cut jeans caught in the chains. I have, in fact, taken lots of pride in the chain guard...especially since the hubs has to put rubber bands around his ankles to keep his pants from getting caught. My bike may be old and rickety and "like the first bike ever made" but it'll be a cold day in hell before my jeans get caught in the chains!

Yesterday, though, my bike was in a bad mood. This probably came from the frustrating combination of not being ridden for a few dozen years followed by being ridden a lot in a short period of time. Somehow the chain on my bike managed to swallow my jeans. After the hilarity of attempting to pull my jeans out on my own and push the petals forward to move the chain with only one foot because my other foot was being held captive, I called for help. While I was waiting for my rescue I managed to remember that I had my camera with me!

Here are some fun little picks of the hullabaloo on Heyburn St.: 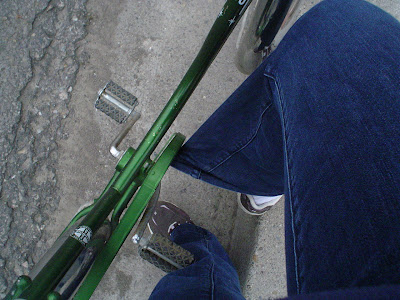 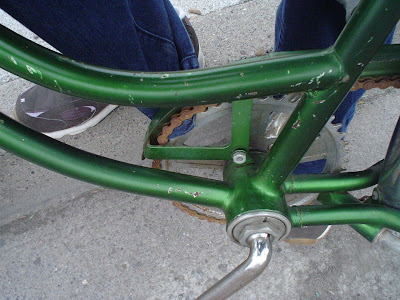 Does this mean that yesterday was, in fact, a cold day in hell?

And now you get to ride in the snow! Hope your pants were saved though.

Sorry you had to say goodbye to your car, but it's good you have a backup plan. I want a bicycle too! :)