It’s that time of year: ice is on the roads, coats are now required attire, parents are taking their children to the mall to stand in line for 2 hours for the opportunity to sit on a stranger’s lap, and Christmas carols are now socially accepted as valid music options (though personally, I’ve had Straight No Chaser’s holiday albums on a continuous loop since Halloween). And again this year I find myself craving that most glorious of winter beverages, the perfect cup of hot chocolate.
Now, I know that there are thousands of delicious cocoa recipes in the world and that I could 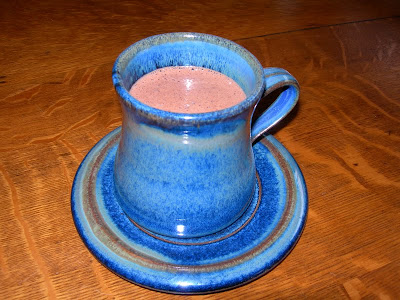 spend all year trying them and be continually amazed by the earth’s collective chocolate genius. However, when I look for the perfect cup of hot chocolate my options are actually a little limited due to two immutable restrictions: 1) I have a permanently bare refrigerator, and 2) I’m lazy. And, well, 3) I live alone and there’s rarely such a thing as a single serving recipe for anything, let alone hot chocolate, but 3 is not necessarily permanent so I’ll stick with 1 & 2 as my main reasons for seeking an instant powdered cocoa mix to satisfy my festive desire.

When this year’s cocoa bug first hit I was with Annie – it was Thanksgiving and we had just visited Nessie for the third time and I suggested we stop at Walgreens (being the only store visibly open) and pick up some hot chocolate. Annie being Annie, however, she already had the makings for Mexican hot chocolate at home. It was truly delicious and she told me I’d most likely be able to find it in a grocery store at home, but the problem is there was milk required, and also lots of stirring and standing next to the stove, and so I decided the Mexican chocolate, though delicious, was not for me.

And so while at home the following weekend and laid out with a vicious cold I started experimenting. First, the standard generic brand hot cocoa mix, one package, 6 ounces of water. Too watery, not enough chocolate taste. After cleansing my palette with a cup of tea, I tried 1 ½ packets generic cocoa mix with 6 ounces of water. Ahhh, much better, though still definitely lacking something.

On my way to work the following Monday, still nursing my super-sized cold, I stopped at the grocery store and grabbed a box of Swiss Miss. Then I added 1 ½ packets to 6 ounces of water and (here’s the genius part) a splash of Half & Half from the office fridge! 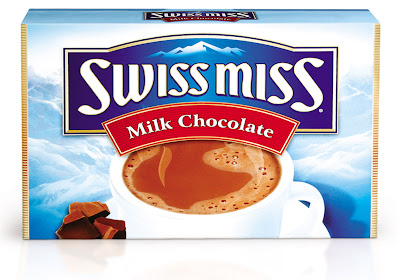 (Note: I do not count Half & Half as a violation of restriction #2 because I usually have it at home. See, I care far more about drinking a decent cup of coffee than I do about eating a decent meal, so while the shelves of my fridge may be desolate there is almost always a pint of cream in the door.) Now this concoction was quite good – the cream gave it just the velvety consistency I was looking for without requiring me to buy a gallon of milk that I’d have no other use for and without necessitating the use of the stove or excessive stirring.

I was willing to settle for my new recipe as this year’s go-to cup when I did a stint of catsitting for my mother. My mother has some kind of unusual lucky streak when it comes to winning crap she doesn’t want, and somehow every year she winds up bringing home a basketful of hot 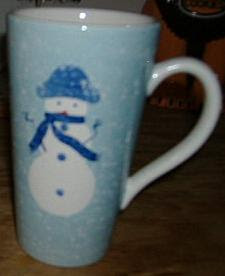 chocolate mix from the office raffle, which then languishes in the recesses of her cupboards until I arrive to liberate it. Another fantastic quirk of my mama’s is that she always has a can of aerosol whipped cream stashed in the fridge, and it’s usually within the expiration date. I have no idea what she uses it for since I’ve never known her to bake and she’s not a frequent purchaser of pies, but somehow Reddi-Whip is ever present in her kitchen. Anyway, while marveling at the wonders of cable television and doing my laundry for free, I created this year’s best cup of instant hot chocolate to date: 1 packet Café Primo chocolate hazelnut (mmmmmm!) mix, ½ packet Swiss Miss standard milk chocolate mix, 8 ounces water, several tablespoons Half & Half, and a giant pillowy helping of whipped cream artfully piled on top, all served in a tall holiday-themed snowman mug. It. Was. Heaven.

I’ll continue to experiment as the season continues. I may even get ambitious at some point and try to duplicate my high school drama teacher’s chocolate miracle which she used to give out at the holidays – it was a dry mix but it was homemade and I suspect it may have contained powered sugar, but she never relented when I begged for the recipe – but for now I’m content to swipe premium mix from my mom’s house and make a one-time investment in Reddi-whip to satisfy my seasonal sweet tooth.
Posted by Annie Bierma at 8:07 AM

Mmmm! I, too, have been seduced by the hot chocolate mistress (err, mister?) recently. I've stumbled upon a homemade recipe I like that's pretty simple, but I gotta say, I like your mix and match method! Enjoy!