As I’m sure you’re all aware, December is NBABBABAAGITSNB month. Which, of course, stands for National Buy a Book by a Black Author and Give it to Somebody Not Black Month. What’s that you say? You weren’t aware? Well, neither was I, until yesterday when I stumbled across the blog “White Readers Meet Black Authors” in which Carleen Brice (an author herself) invites people of all races to read books by black authors. In an introductory post titled, “You’re Invited!” Ms. Brice greets booklovers:

Welcome readers of all races, shapes and sizes. Here is where you'll be safely, carefully introduced to books written by black people. Now, don't be alarmed. The books are written by black people, but like other books, they can be read by anybody. In fact, we WANT you to read our books. Don't let the fact that publishers and booksellers put us in the back in the special section of the store scare you. They do that because they want African American readers to be able to find us easily, which is a good thing. However, it has come to our attention that it also puts some of the rest of you off.

So we are extending an official invitation for you to check out our section of the bookstore.

This blog came into my path at exactly the perfect time. A few minutes previously I had asked my mother, “Did you ever think of anything you want for Christmas?” And she said, “Yeah, actually I’d like to find a new series of books to read. I liked the Harry Potter and Ender’s Game books, so something new along those lines.” And I sat there thinking, “Well, I don’t know of any more magic realism or science fiction series that would suit my mother’s tastes. None that she hasn’t already read, anyway.” And then into my lap fell Ms. Brice’s blog. She even has a post devoted to science fiction/fantasy writers.

So, this Christmas my Mom is getting:

Lilith’s Brood by Octavia E. Butler. This is the full Xenogenesis trilogy in one volume. (All synopses in this post are from Barnes & Noble.com) 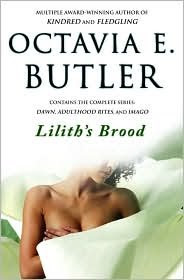 The acclaimed trilogy that comprises LILITH'S BROOD is multiple Hugo and Nebula award-winner Octavia E. Butler at her best. Presented for the first time in one volume, with an introduction by Joan Slonczewski, Ph.D., LILITH'S BROOD is a profoundly evocative, sensual — and disturbing — epic of human transformation.Lilith Iyapo is in the Andes, mourning the death of her family, when war destroys Earth. Centuries later, she is resurrected — by miraculously powerful unearthly beings, the Oankali. Driven by an irresistible need to heal others, the Oankali are rescuing our dying planet by merging genetically with mankind. But Lilith and all humanity must now share the world with uncanny, unimaginably alien creatures: their own children. This is their story...

Mom will also be receiving books one and two of a fantasy series by new author Leslie Ann Moore. Book one, Griffin’s Daughter, won the 2008 Ben Franklin Award for Best First Book. 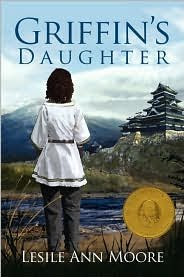 Moore's novel tells of a young, orphaned woman who is scorned by society for her mixed human and elven blood. She discovers that she possesses a mysterious magical power and when she travels to Elven lands in search of answers, she discovers a shocking truth about her identity that will have epic consequences for an entire nation.

And then, because I was on a roll, I found the perfect book for my Dad! He loves suspense novels, especially anything to do with disease and/or religious mythology. So I bought him Blood Colony, by Tananarive Due. 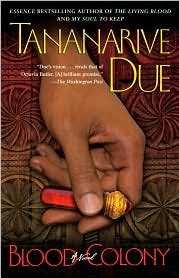 There's a new drug on the street: Glow. Said to heal almost any illness, it is distributed by an Underground Railroad of drug peddlers. But what gives Glow its power? Its main ingredient is blood — the blood of immortals. A small but powerful colony of immortals is distributing the blood, slowly wiping out the AIDS epidemic and other diseases around the world.

And, of course, in the process of shopping for my family, I couldn’t help but be seduced by a book or two myself. So, Merry Christmas, me! I’ll be reading Getting Mother’s Body by Suzan Lori-Parks (I was familiar with her work as a Pulitzer Prize winning playwright, but I had no idea she wrote novels as well) and Sugar, by Bernice L. McFadden. I was actually moved to purchase this last book by Ms. McFadden’s plea on her own blog, Naki. Sugar is celebrating its 10th anniversary on January 9th, 2010, and while it was highly praised and very successful upon its release, Sugar, along with countless other books by African American writers, is now disappearing from the shelves of bookstores. Why? Ms. McFadden poses and attempts to answer this question:

I don't rightly know why publishers market fiction written by African-Americans ONLY TO African-Americans - but it has become common practice. And by doing this, they've placed all AA authors in one box forcing them to compete for the attention of ONE audience.

The word that has been coined to describe what is happening to AA writers is: Seg-Book-Gation

Segregation is an abominable practice no matter how you slice it - but when you apply it to art -- it becomes a sin. Art of any medium should transcend color, race, class, religion and ethnicity, but alas, that is not the case in the publishing world.

If there is one truth I believe in unfailingly, it is the transcendent power of art. So, if you have any last minute shopping to do and are looking for the perfect gift idea, why not buy a book by a black author for a person on your Christmas list? Help someone fall in love with a new writer this year, and help tear down the barriers segregating the literary art form.
Posted by Annie Bierma at 12:25 PM