Happy Friday! This has been one busy week that's for sure. I tried my best to find time this week to blog about a fun DIY idea I have but alas I have had no time to put it together, which is a shame as it's been a lovely idea in my head for quite a while now. Instead, my friend Nikki brought this lovely old movie to my attention and even did a little writeup about it. Your DIY project has officially turned WIY (Watch It Yourself). Please stop back by and let us know what you think! 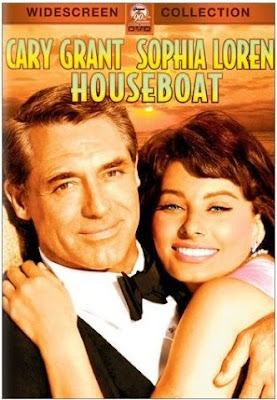 Plot:
When Tom Winters (Grant) learns that his ex-wife has died, he is forced out of his perfect life in D.C. as a government attorney and is left with three kids (In my opinion they were little brats) who want nothing to do with him. While at a concert at Watergate, the youngest son, Robert runs away only to be found by Cinzia Zaccardi (Loren), the daughter of the famous Italian conductor of the a fore mentioned concert.

Cinzia has also run away in search of adventure in America when she and "Roberto" happen to meet by chance on a rowboat. From here a chain of bad luck leaves the family & Cinzia living on a run down houseboat, forcing them all to make nice.

The fabulous writing and cheeky chemistry between Grant & Loren are sure to please. If you like cutesy chick-flicks with classic charm, this one is for you!

Goofs:
Tom's apartment is in Washington, D.C., but when he's shown driving his kids to the concert at the Watergate, he approaches the area from the Virginia side of the Memorial Bridge, the opposite direction from which he would naturally have been traveling from the city.

Trivia:
Original screenplay was written by Betsy Drake, Cary Grant's wife. Grant originally wanted it to star her but his extra-marital affair with Sophia Loren complicated the project. Drake's script was drastically re-written by two other writers to accommodate Loren and bears little resemblance to Drake's initial concept.

Cary Grant initially accepted his role in Houseboat (1958) primarily because he was seeing Sophia Loren at the time. After she married another man during the filming of the project, Grant was heartbroken and tried to back out but was unable to get out of his contract. Fortunately for us, Melville Shavelson was able to direct a seamless production.

Who was the man responsible for stealing Loren away from Grant? It was none other thanCarlo Ponti who obtained a Mexican divorce from his first wife and married Sophia Loren by proxy, while she was in Hollywood, filming this 1958 classic.
Posted by Annie Bierma at 7:00 AM

One my all time favorite movies!!!! I love how the little boy falls in love with Loren. The scene where Sophia restyles that god-awful dress is great also. Thanks for bringing back some great movie watching memories.