One year ago, my husband and I moved across the world from Boston, Massachusetts to Gothenburg, Sweden. Among the vast cultural differences we encountered, we had to make the huge adjustment of going from a ginormous (to us) four-bedroom condo to a 400 sq. ft. student apartment with such a lack of amenities that I was left proclaiming that we had just moved – supposedly by choice – to prison. 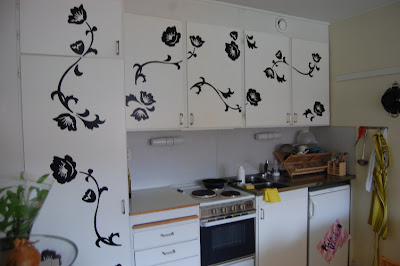 When we first arrived in Sweden we came with five suitcases, and nothing to fill our cabinets except my left-handed kitchen scissors. A year later, I've scoured charity shops, collected enough platters and dishes to serve American Thanksgiving, and started a collection of large yogurt containers simply because we eat so much of the stuff that I feel wasteful throwing out all that plastic. Perhaps most notably for today's purposes, I am a self-professed sauce- and spice-whore. I've tried to come up with a more polite term, but there isn't any. I am what I am. They should probably have a group in a church basement somewhere where I can go every Tuesday and say, “My name is Kate, and I'm a spice-whore.”

In addition to a vast array of spices, we've also had a recent infestation of kackerlackors. In case you were confused, as I was, “kackerlackor” is the cute Swedish word for “cockroach”. While the critters look less threatening than their American counterparts, the creepy factor remains the same. The presence of these horrific things has 1) introduced the need to clear out some space for those sticky death traps and 2) made me not want to have things so cluttered that I couldn't see if an adorable kackerlackor was hiding behind that bottle of Japanese rice vinegar.

A little clean-out and reorganization was in order for my critter-harboring, spice-propagating cabinets. Our place is just too small to have things be chaotic, even if that chaos is behind closed doors. My spice addiction has meant that the spice shelves were the most out-of-control, taking up more space than necessary, and, consequently, the least accessible in terms of knowing what I had and where it was. I've accumulated quite a number of spices in bulk, some of which I'd transferred into empty spice bottles. These, however, were not clearly marked, and were essentially an International Ethnic Cuisine Incident waiting to happen. Say, for instance, I sprinkled Chinese five-spice powder instead of cinnamon over my morning oatmeal. The only feasible result is BLECH, and it would happen all over my kitchen floor. My solution for the spices was to relocate them to a drawer all their own, which also needed to be cleaned out. 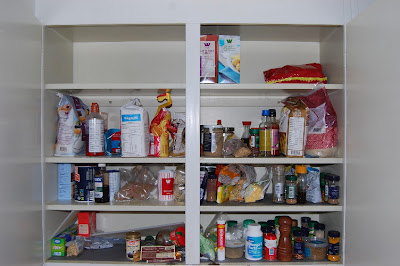 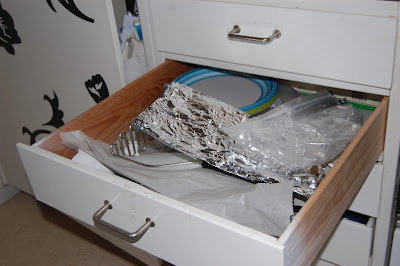 I took to IKEA like white on rice and found myself some brilliant spice drawer organizers. This opened up 1 ½ shelves on which to arrange my new pots (previously, they'd juggled for space on the stove). Even just going through my shelves to see what was hiding was helpful, and I get a cheap thrill each time I've been able to use up something that had been wearing out its welcome. 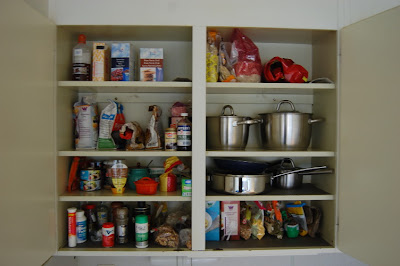 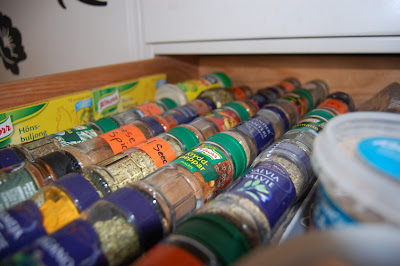 I am quite pleased with my end results. I clearly labeled [in orange] the bulk spices that I had repackaged into normal-sized jars, and the new spice drawer is almost organized in alphabetical order. My pots each fit nicely with their own lids nearby. I've got a baking shelf, and the top shelves are for items that I don't use often, such as corn syrup and egg noodles. My grains and legumes – quinoa, garbanzos and polenta to name a few – are on the bottom shelf, right at eye level. This is a handy visual reminder to utilize these items and eat more healthily.

In at least one of my dream worlds my kitchen would be my primary workplace. It would be a place where I spent hours a day utilizing every piece of gourmet equipment known to man and finding inspiration in surprising flavor combinations from around the world.

That's not quite what my life is right now. What it is is busy and multi-faceted, with lots of changes all the time. While I can't control all the circumstances that make life a bit chaotic here and there, I am finding that having even this one small area of my apartment be accessible and organized is enough to spread a little bit of peace into the rest of my life. This, I like.

How about you? Got any parts of your home of which you are particularly proud?

I too love Ikea. Like the looks of your drawer.

Thanks, Michelle! If you're interested, here's a link to the spice organizers I used in that drawer: http://www.ikea.com/se/sv/catalog/products/50119916. Unfortunately, I could only find them on the Swedish IKEA site, but your local IKEA might have them, too.